Welcomes you to an exhibition of work by…

Please e-mail hangar.framing@btinternet.com for catalogues of Hugh and Sara’s work and to book in for a viewing 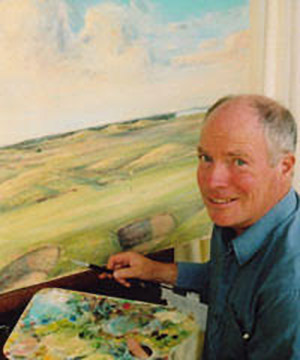 Hugh Dodd was a highly respected and well-loved Scottish artist, illustrator and writer based in East Lothian, Scotland. A natural draughtsman, Hugh always drew from life in both his figurative and landscape works. His first exhibitions were of pen and ink drawings, moving later to larger watercolours and oils. He exhibited widely with solo shows at The Scottish Gallery and Edinburgh Gallery in Scotland and at Colnaghi and The Chris Beetles Gallery in London.

Hugh’s illustrative work featured regularly in local and national press including The Scotsman, the Spectator, Telegraph and many UK and international magazines. He was co-creator, with Maxwell Macleod, of The City Croft a daily cartoon strip running for 3 years in The Herald, Glasgow and was Art Editor of Caledonia Magazine.

His many caricatures satirising the sports of hunting, racing, cricket, rugby and golf as well as the legal profession and Scottish characters have been reproduced in print, card and book form selling in both the UK and North America. He created four books: including The Greatest Game, an illustrated history of golf with Prof. David Purdie.

Hugh’s larger oils were primarily inspired by Scottish golfing landscapes and people. These are complemented by watercolour and gouaches of coastal landscapes and sea views. His work can be found in private, public and corporate collections around the world.

Hugh sadly passed away in June 2014 just weeks before four of his pictures featured in a major exhibition, The Art of Golf, at The Scottish National Gallery, Edinburgh. His obituary was written by his great friend, Roddy Martine, and was published in The Scotsman and East Lothian Courier. 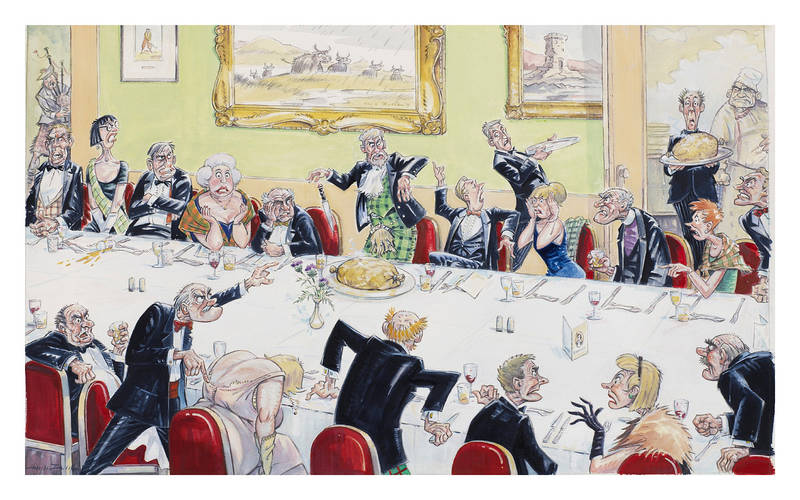 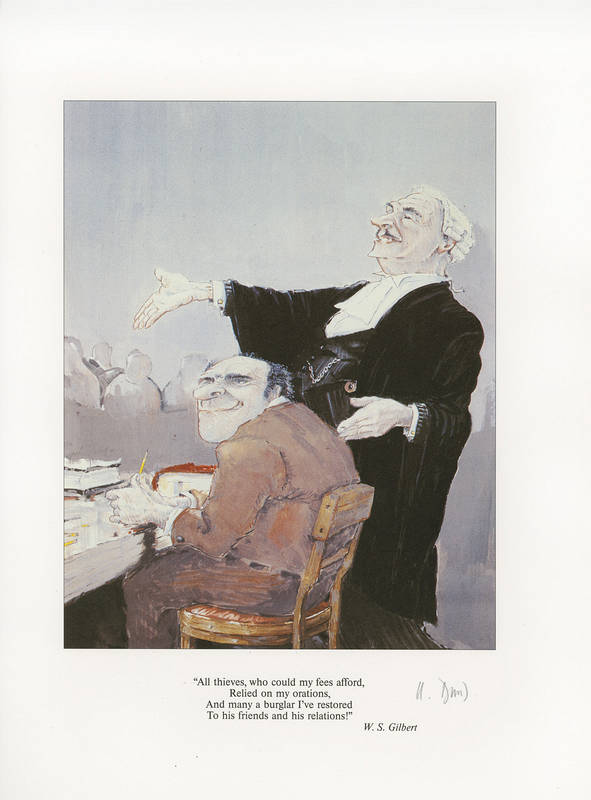 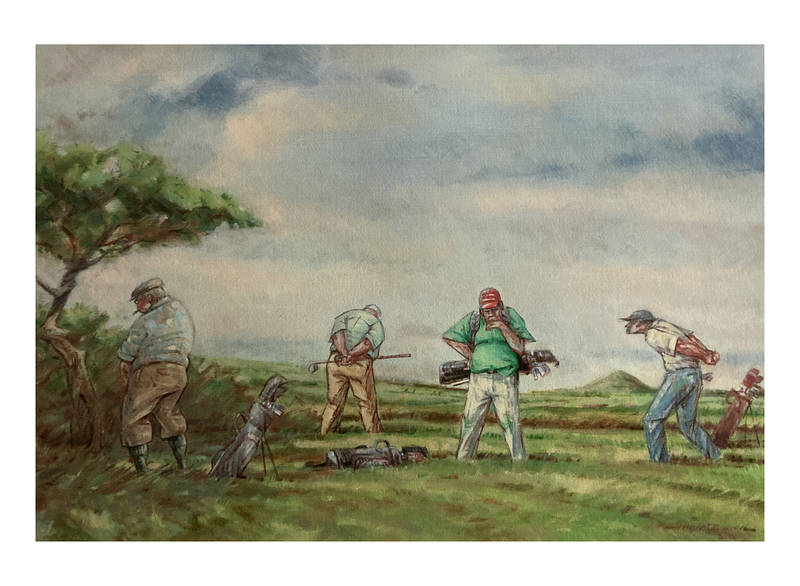 This exhibition of sea flora represents only a fraction of the species of seaweeds to be found growing along the east coast of Scotland. Blanketing the rocks and foreshores of our estuaries, bays and inlets, they are a familiar sight to the beach-goers, fishermen and sailors. But few of us have seen beyond the fringes of leathery wracks and rubbery kelps at harbour’s edge, or the heaped and tangled detritus cast up by a stormy sea.

Gathering and pressing seaweeds was a serious pastime for Victorians. They sent their specimens to fellow collectors around the world in quest of discovering new species and contributing to botanical science. Once dried, labelled and catalogued they were consigned to dusty albums – many of which still make up the core of our Herbarium today.

Inspired whilst collecting herbs along the beautiful coastline from Aberlady Bay to Dunbar, artist Sara Dodd returned to this tradition to look again at the flora at the water’s edge. Initially pressing to identify and display, she became engaged with the abstract beauty of organic form eroded by the destructive forces of tide and time. Her focus has evolved to capturing moments of transition, highlighting a particular specimen’s translucency, coloration, character, or flow and playing with the blur between graphic line, abstraction and aesthetics.

Sara Dodd as born in Carmel, California and grew up along the Monterey Coast and San Francisco Bay. She studied History of Art and Landscape Architecture at UC Berkeley and moved to Scotland in 1988. Completing the Herbology Course at the RBGE in 2011 her work is collected by private buyers and forms the basis of new prints and textile designs. 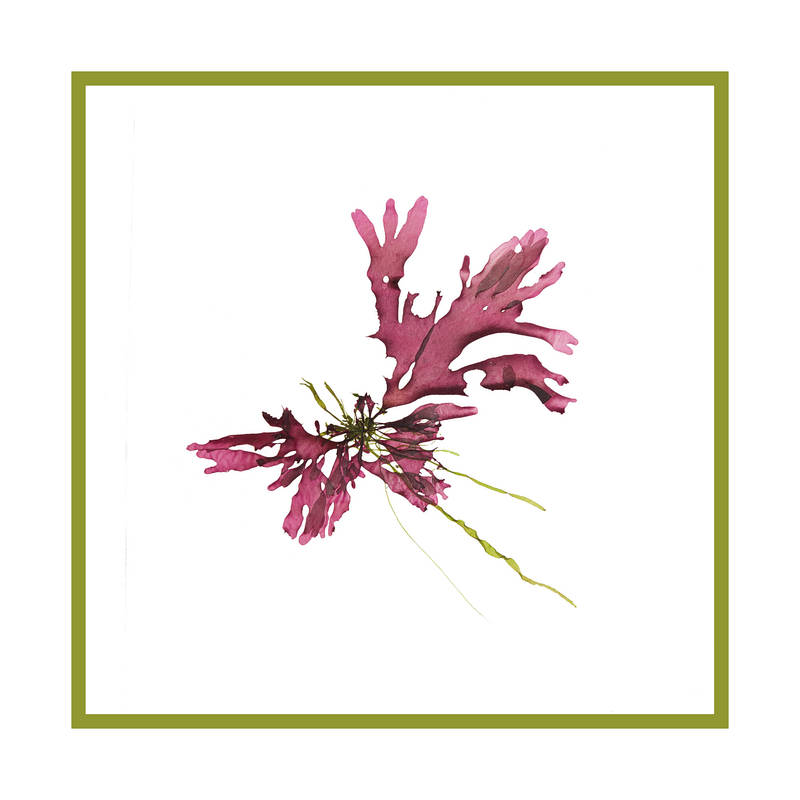 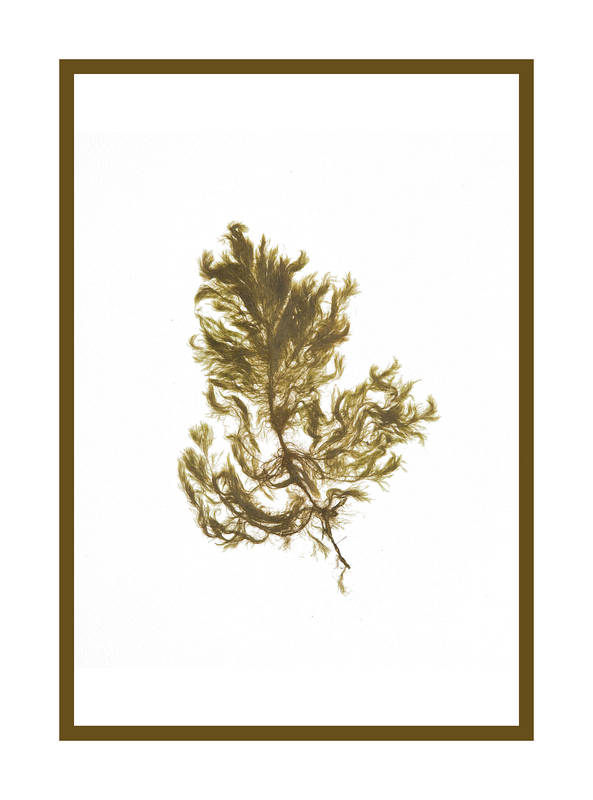 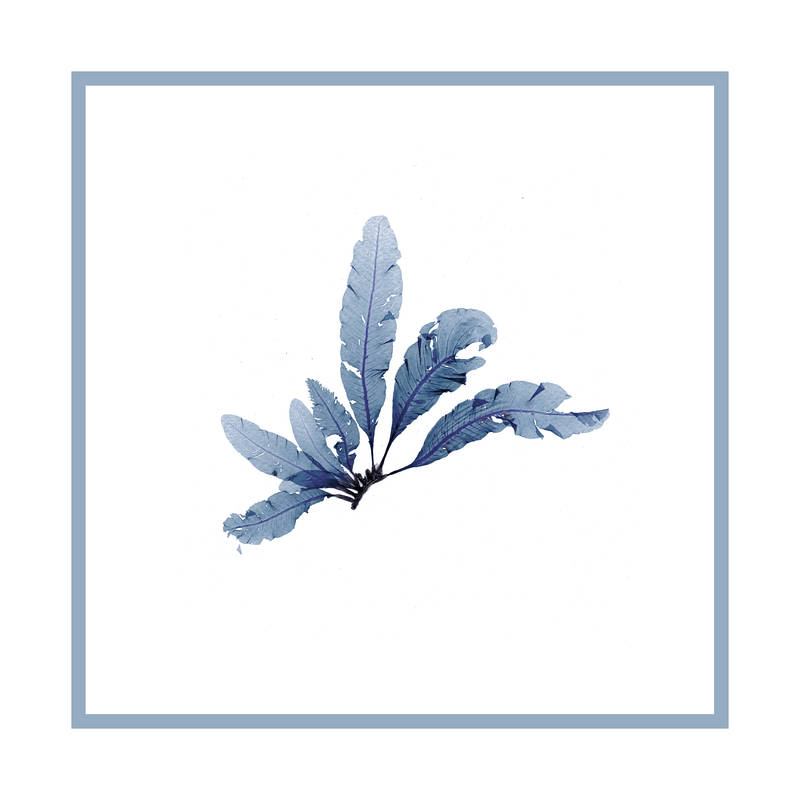 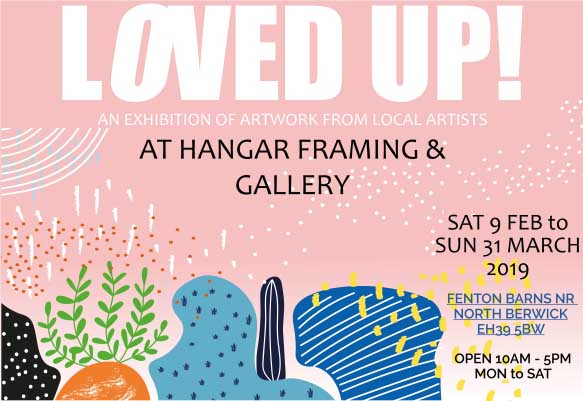 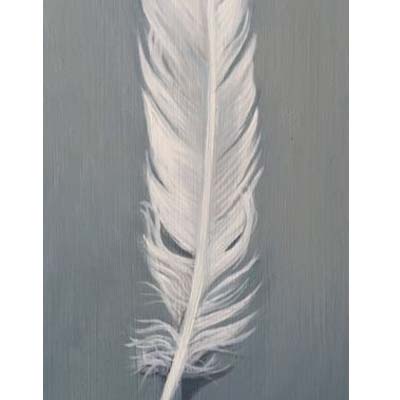 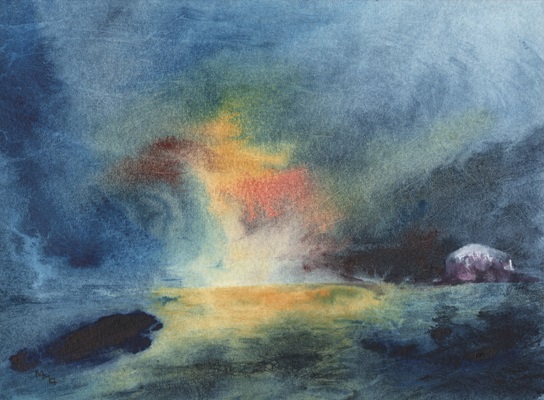 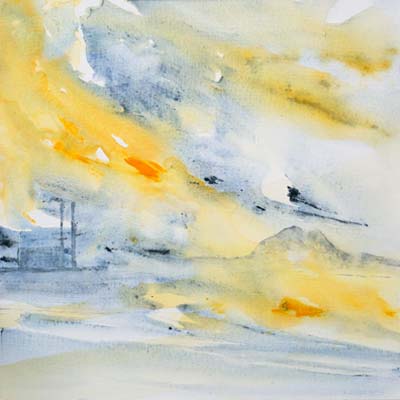 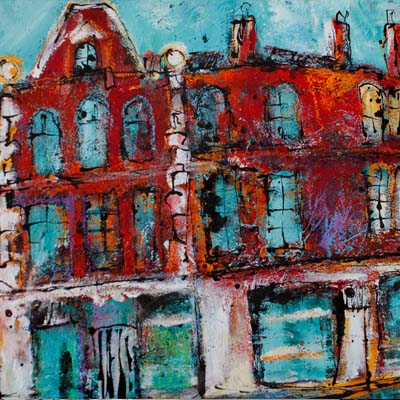 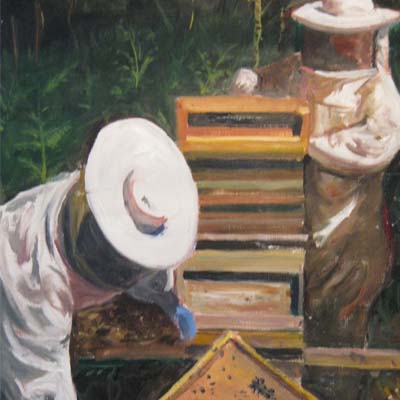 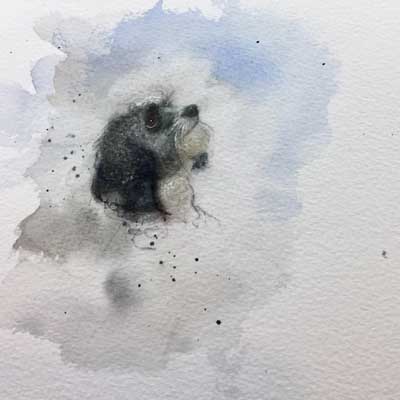 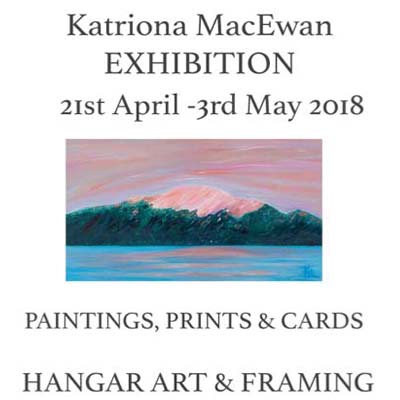 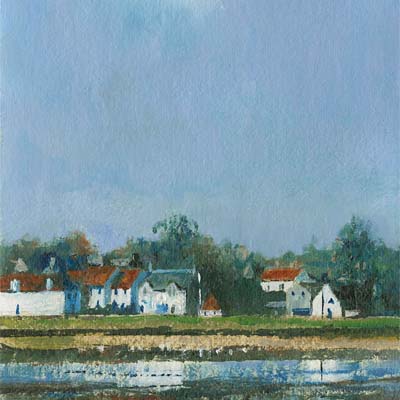 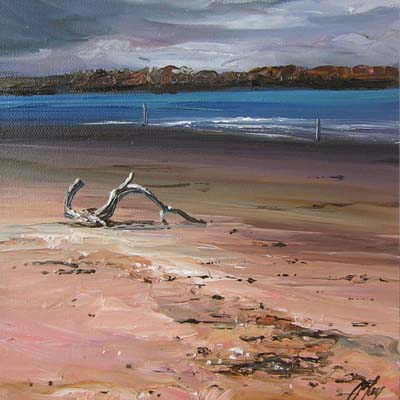 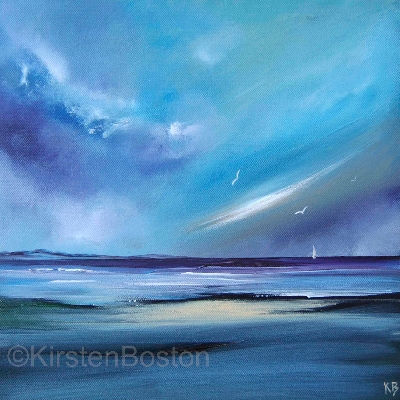 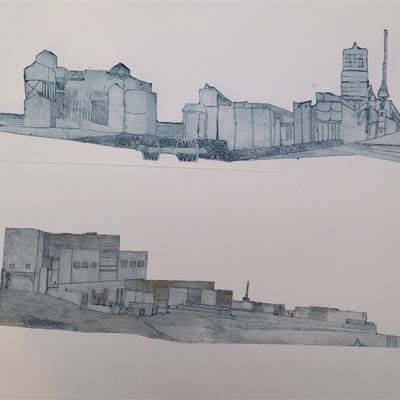 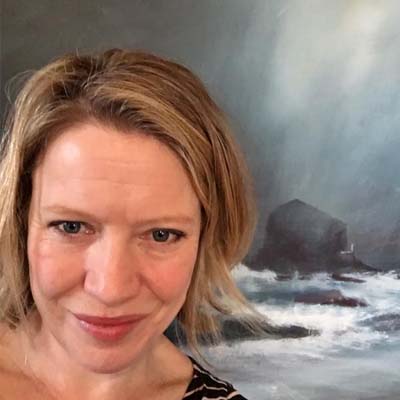 View More
At Hangar Art & Framing based in Fenton Barns, North Berwick we are pleased to announce the exhibition for April 2017 is Fee Dickson.  Her Forth Light art exhibition will be on show from the 1st of April for the full month.

Fee Dickson’s work explores the transformations wrought by changes in light, time and tide on the landscape. Using a limited palette of both colour and subject matter, she seeks to reveal the infinite variety of beauty in the environment.

Born in 1972 in Dunbar, Fee graduated from Edinburgh College of Art in 1999 with a Master of Architecture. She has been painting semi-professionally for a number of years alongside her architectural work, and since 2011 has been focusing fully on painting.  She lives and works in North Berwick. 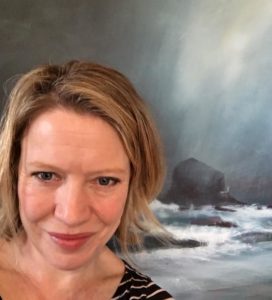